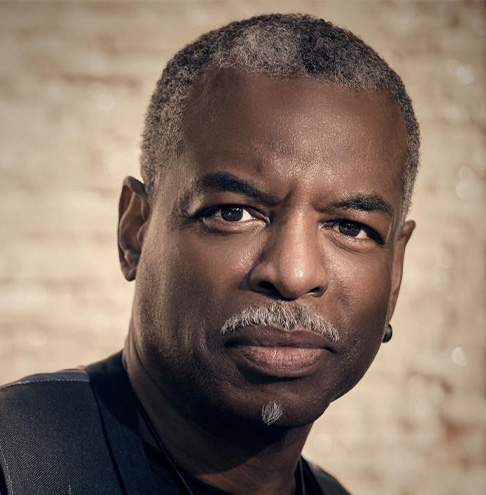 LEVAR BURTON is an actor, director, educator & cofounder of the award-winning Skybrary App; former host and executive producer of PBS's “Reading Rainbow;” and a lifelong children's literacy advocate. He hosts his own podcast, ‘LeVar Burton Reads’ sharing the best short fiction and handpicked by the best voice in podcasting. LeVar also has a new YouTube Series ‘This Is My Story’ which highlights racism in America.

During Covid-19 lockdown, TwitterLive hosted livestream short story readings presented by LeVar to millions of his fans and avid readers.

LeVar starred as Kunta Kinte in the acclaimed mini-series ROOTS. LeVar also starred as Lt. Commander Geordi LaForge in STAR TREK: THE NEXT GENERATION television series and in feature films.

LeVar has been nominated for three Primetime Emmy Awards along with 27 Daytime Emmy nominations, culminating in 21 wins. During its 26-year run1983 to 2009 READING RAINBOW was not only one of the longest running children’s television shows in history but won more that 25 awards including 10 for outstanding series and the prestigious George Foster Peabody Award. LeVar has also been nominated twice for the Spoken Word Grammy Award and won in 1999, for narrating “The Autobiography of Martin Luther King Jr.”