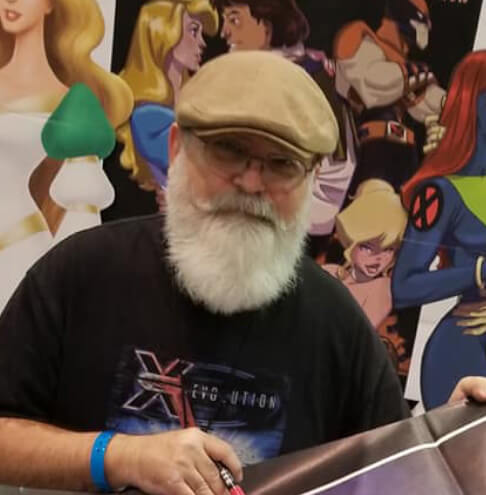 Steven E Gordon’s professional career began in 1977 when he was hired by Ralph Bakshi Productions to work on the animated feature film Lord of the Rings. He stayed with Ralph through several more films was promoted to Animation Director and Key Animator/Character Designer on the Ralph Bakshi / Frank Frazetta feature Fire and Ice.
He then landed the unusual entry job of Animator at Disney Pictures animating on The Black Cauldron and stayed there for about five years and animated on The Great Mouse Detective and helped develop Oliver& Co. He returned to Bakshi to direct on season 1 of the groundbreaking Mighty Mouse series and then he spent 12 years working on and off with Rich Animation on a series of direct-to-videos, doing character design and layout which eventually culminated with him being Animation Director / Character Designer / Key Animator on The Swan Princess. He also was key animator during this period of Holli Wood on the feature Cool World for Bakshi.

In 2000 he was hired to be one of the directors and the sole character designer on X-Men: Evolution. Afterwards Dreamworks Animation hired him as a story artist and he worked on Shrek 2 and Over the Hedge. Then he went on to be a co-director for Marvel/LionGate as well as the character designer on The Ultimate Avengers and its sequel. Then he directed in the TV series, Wolverine and the X-Men for Marvel as well as The Avengers: Earth's Mightiest Heroes. In his quest to continue to be employable he started illustrating children's books based on film and comic characters for HarperCollins (and other publishers) as well as illustrating comics such as "The Eternal Savage"™ for ERB, Inc. and HeadHunter for SitComics

He has also worked in live-action as a storyboard artist for Terminator: Salvation and the live-action version of The Jungle Book directed by Jon Favreau for Disney. He continues to create storyboards and character designs for a variety of projects including for a Marvel Animated series